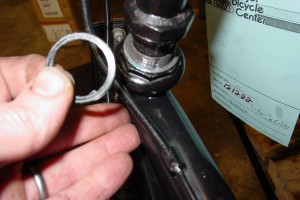 Traditional headsets with keyed washers seem to always frustrate folks not familiar with them. That delicate little keyed “tab” must fit into the slotted section of the fork. If it has been sheared away or if the fork key-way has been damaged (usually by simply tightening the lock nut without the use of an additional headset wrench on the bottom portion), the headset will likely not stay tight.

Shorter head-tubed bikes with traditional keyed headsets are also particularly prone to issues because of the shortened distance between the two races and thus the advantaged leverage to the system.

Always try to tighten your headset with two wrenches (if possible). One can apply slight reverse (counter clockwise) pressure to lessen the chance of stripping on the bottom cup/ wrench while tightening the top. Channel lock type wrenches can be used for this purpose on less expensive headsets or by tightly holding the often keyed reflector/ hanger/shifter mount to prevent movement when tightening the lock nut if the underling cup cannot be accessed. Greasing the flats on washers and cup/nut flats also helps fight friction which turn and strip the washer or fork. Replace any worn washers and/or add reconfigure washers to move the position a washer sits if a fork has a damaged keyway. A new headset with different stack height might help (or Chris King key-less type headset if the fork is $$$-  though a new fork may often be cheaper). 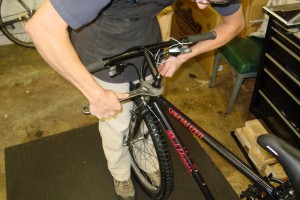 Loose bearings on the bottom cup can even fix many “indexed” headsets. By increasing the number of bearings in this way, one can spread the impact of road forces transferred across more bearings. It also allows them to move around a bit better keeping them from being compelled into the same spots by a retainer. But don’t overpack. Leave a gap to help insure that the bearings do not bind. Loose balls are not as necessary for the top race. And when properly adjusted the headset should ideally be spot on. An overly tight headset actually helps lead to those notches as it forces the bearings (esp w/ retainers) to sit in the exact same spot.  A very slightly loose quality heaset with intact keyway will actually work just fine. And most headsets installed and adjusted correctly will continue to work. They get “loose” in the winter because of shrinkage from the cold but continue to work.

When you’ve made your final adjustment with wheel installed and wheel/ fork braced, bounce rigorously in an attempt to simulate hard ridding conditions and loosen things up. This will not damage anything that would not otherwise be damaged/ loosened while riding. Loose? Loosen re-tighten gradually in measurable increments; say, 1/8s of a turn. 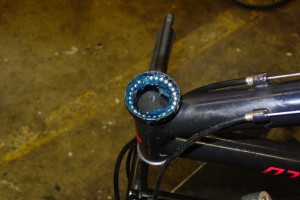 Shimming a belled-out head tube can be done so long as the frame is not too far gone. Use a steel can whenever possible to prevent mushing. Cut a strip to fit just around the cup circumference to be inserted and don’t overlap. You can easily hammer a shim to thin it out if need be. I’ve had success with the following to keep the shim from slipping when inserted with the press: Try putting the shim on half way up the cup so that it slips toward a nice fit as installed. Use grease on the frame (not ordinarily recomended) and rim cement on the cup. 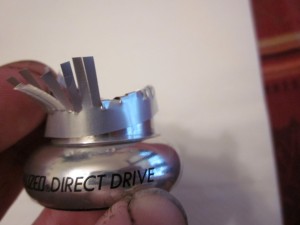 Finally, though time consuming this almost always works to prevent slippage. Make many very fine cuts part way through the shim- which should look like grass when done. The cuts should be long enough to fold over the rim of the cup leaving enough uncut shim to fit the inserted portion of the cup- or a little less as it will move downward. You may have to remove some of the ridges created by the folds on the grinder and securely “counter- seat” with the headset press’s install guide if possible. Remove any obstruction to the fork caused by loose tabs after pressing in cup. Loose balls strongly recommended; you don’t want to do this again anytime soon.

Finally, larger 1-1/8″ headsets are just less finicky as they have larger races (distance across load surfaces) and more bearings. Although these units may not have to be as tight or accurately adjusted as 1″ models don’t take chances. A loose headset may not keep you from getting home but why not prevent the avoidable.

An old tube, cut and stretched around the bottom race can act as a seal.